My work was shown as part of CHAPTER 4OUR: Abundance, a group exhibition curated by writer, maker, and activist Simon(e) van Saarloos and curator Vincent van Velsen at Het HEM, Zaandam, Netherlands. Running from June-October 2021.

Chapter 4OUR: Abundance refuses the current structures of reality Abundance opposes the idea of identity stasis. Abundance refutes the notion that you can be knowable and that you must show yourself visibly, that you have to come out proud and sound coherent. Abundance assumes that everything already exists; no existing form is obligated to defend or prove itself. Thinking from abundance is a philosophical attempt that recognizes current identity frames, but also encourages to refuse and surpass them. Abundance is the wealth of presence. (taken from Press release) 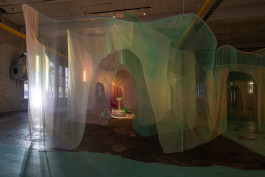 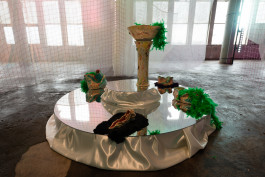 IMAGES Ruffles Remains, Ceramics from past performance of Ruffles, 2019 reconfigured on mirror plinth with feather boas and fur, 2021. 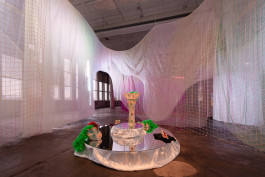 “The woman who drinks excessively can seem an ultimate act of transgression, behaving in an unruly and unmediated way which is at odds with socially acceptable representations of the feminine.” declared Zoe Williams in an interview. It’s the sinful things that make life fun. Especially in the context of the Dutch Protestant North, where every manifestation of excess is regarded as undesirable. Even more so for women, who are not supposed to act dishonourably and should behave politely. Not Zoe Williams. Her bacchanalian performances feature an abundance of food. Piled, filled and spilled, looking like a comic strip version of a medieval dinner. There is lots of it, it is greasy, it drips, and it smells. However, nothing is consumed, only touched, used, smeared, swapped and consumed. It’s precisely the lack of purpose which she emphasizes, the luxurious, superfluous but oh-so pleasurable aspect that we so often are ashamed of – or that we’ve been taught to feel ashamed of: physicality and the pleasurable activities in life. The sculpture versions are loud in their colors, less grandiose and transient, but no less abundant.